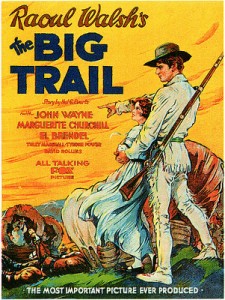 John Wayne’s first starring role was in The Big Trail, a western written by Hal G. Evarts and directed by Raoul Walsh.  It was this film in which handsome 23-year-old Marion “Duke” Morrison became “John Wayne”, a name chosen by the director and the head of Fox Studios.  The film told the story of a wagon train on the Oregon Trail less than a century before, shot on location across the West, with remarkable attention to authenticity. Marguerite Churchill played the young woman who catches Wayne’s eye. 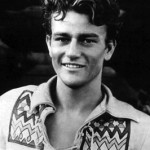 One of the early widescreen productions, it was filmed with two cameras (one standard 35mm, the other a wide-format 70mm), sometimes side by side, other times restaging or reframing scenes to fit the format.  It was also a talkie, but not shot in color (the other hot new technology of the day).  Although the 35mm version allowed it to be screened widely, the limited number of cinemas capable of 70mm projection, and the weak market of the Great Depression, hurt it at the box office.

Under traditional copyright law, The Big Trail would have entered the Public Domain at the end of 1986.

This entry was posted in 1930s, Movies. Bookmark the permalink.