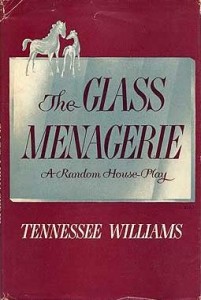 The Glass Menagerie was the first major success by playwright Tennessee Williams, first produced in 1944. It’s based on an earlier short story by Williams (published a few years later).

It is a reminiscence by amateur poet Thomas Wingfield (think “playwright Thomas Williams”) about the struggles of his southern-belle mother, his handicapped and introverted sister, and his own frustrations trapped in a life he hates, following their abandonment by their husband and father.  The title refers to the sister’s collection of glass animal figurines.

Williams adapted it into a screenplay for MGM, but apparently they didn’t produce it.  It was instead adapted in 1950 into a film with an upbeat Hollywood ending, which Williams hated.

The play should have entered the Public Domain at the end of 2001.

This entry was posted in 1940s, Movies, Plays, Prose. Bookmark the permalink.