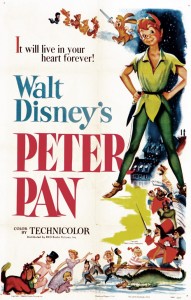 The original story of Peter Pan, Wendy Darling, Captain Hook, and Tinker Bell is in the public domain in most of the world, having been published by creator J. M. Barrie in novel form in 1911.

Although the basic story is the same, Disney’s version gave us the distinctive Peter Pan costume, the Lost Boys’ animal suits, and the appearance of Tinker Bell as a blonde in a not-very-modest green dress.  It included several songs, such as the melodic “Second Star to the Right” and the deplorably racist “What Makes the Red Man Red?”

Under PD56, Walt Disney’s animated musical adaptation – released in theatres in 1953 – would have entered the Public Domain at the end of 2009.

This entry was posted in 1950s, Movies, Music. Bookmark the permalink.