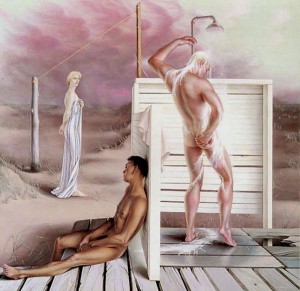 “The Shower” is one of many groundbreaking paintings and illustrations by Paul Cadmus. It depicts three figures at a beach: one nude male using a semi-open shower, a nude male seated facing away from the shower, and a woman wearing a wrap, standing a short distance away and looking generally toward the shower.

The social significance of Cadmus’ work is substantial. Although the visual style of his works typically called back to earlier realistic schools of painting (counter to the trends of the time), the subject matter and its treatment challenged social norms. His earlier “The Fleet’s In” (commissioned by the US government) depicted members of the US Navy in a drunken and bawdy scene. Works such as “The Shower” unapologetically eroticized the nude male figure while remaining chaste and inexplicit enough to deflect accusations of being pornography… while serving as the inspiration and template for much artistic gay porn of the following decades. His works also routinely commented silently on other social issues.

Cadmus died on December 12, 1999 at the age of 95. Under the copyright laws in effect when “The Shower” was created, it should have entered the Public Domain a few weeks later.

This entry was posted in 1940s, Fine Art. Bookmark the permalink.