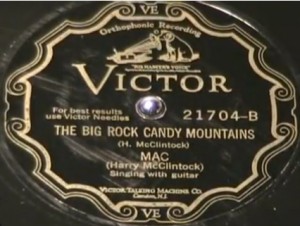 “The Big Rock Candy Mountain” might not actually be under copyright; it’s complicated. It was recorded and published in 1928 by Harry “Haywire Mac” McClintock, but a prior copyright by another party was filed in 1906. McClintock managed to find proof that he’d been singing it for years before that, asserting that he wrote it in the 1890s. And it’s based on material that goes back centuries. But even if Haywire’s 1928 copyright was valid, it should have entered the Public Domain no later than the end of 1984.

The lyrics were bowdlerized in 1949 by Burl Ives to make it suitable for children (the “cigarette trees” became “peppermint trees”), which is how many people know it today.  But in its “original” form, it was substantially darker. It’s a tale spun about a hobo’s paradise, where cigarettes grow on trees, lakes are filled with liquor, jails are made of easily-broken tin, and the police are too disabled to chase those caught breaking the law … as hobos routinely did. The story is being told by an adult hobo trying to lure a boy to go with him; the rarely-sung closing verse reveals that the hobo wants the boy for sexual purposes.

Particularly in its original version, it’s an important piece of Americana, as demonstrated by its inclusion – presumably with royalties paid to someone (McClintock died in 1957) – in the 2000 film “O Brother, Where Art Thou?”

This entry was posted in 1920s, Music. Bookmark the permalink.