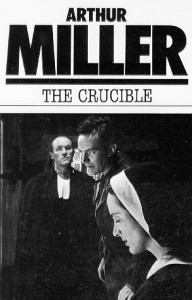 The Crucible by Arthur Miller ©1953

The Crucible (1953) is the second-best-known play by Arthur Miller (after Death of a Salesman), and arguably his most important.  Telling a tale from some 350 years earlier (now over four centuries ago), it dramatizes the infamous witch trials of Salem Massachusetts, which Miller used as an allegory to Senator Joe McCarthy’s then-ongoing paranoid crusade against Communists in the entertainment industry.  The characters are technically historical figures, but for dramatic purposes (and since almost nothing was known about them) Miller invented their personalities, as well as the details of the plot.

Under PD56 it would have entered the Public Domain at the end of 2009. The film adaptations by Jean-Paul Sartre (1957) and by Miller himself (1996) are protected by their own copyrights.

This entry was posted in 1950s, Plays. Bookmark the permalink.