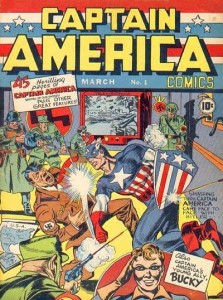 Captain America was created by Joe Simon and Jack Kirby, in the early years of World War 2, before the U.S. formally entered the war.

The character is a study in irony.  His creators were Jewish, but Steve Rogers and his sidekick Bucky Barnes were WASPs, indistinguishable from the Aryans they fought. They served as cheerleaders for America to get involved in – and then help win – the fight against the Nazis.  After the War, Cap was recast as a “Commie smasher”.  Following a hiatus during the 1950s when superheroes had fallen out of popularity, he was brought back as part of the genre’s revival in the 1960s, again serving in the decades since then as an icon for whatever the prevailing notion of “patriotism” has been.

When copyright terms were extended in the 1970s, Congress acknowledged (on some level) that this was a free windfall to copyright holders, and included a provision to allow the original creators of works sold to corporations to reclaim them when the original 56-year term expired.  Kirby had already died by that time (Simon asserted that Kirby, then a Marvel employee, had little involvement in creating the character), but Simon filed to reclaim the copyright in 1999.  Eventually Simon – old and in poor health – settled out of court for royalty payments.

This entry was posted in 1940s, Comics. Bookmark the permalink.