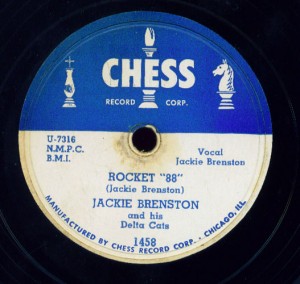 "Rocket 88" is arguably the first Rock and Roll song. It’s a celebration of the new Oldsmobile 88, one of the archetypal pleasure-craft automobiles of the era, and (almost as obviously) a celebration of sex. It was recorded in March 1951 by Ike Turner and his band, with vocals by saxophonist Jackie Brenston (under the name “the Delta Cats”), and went to the top of the Rhythm and Blues charts. A few months later, Bill Haley’s Saddlemen – a Country and Western band – recorded a version which was a big hit in the northeast US. It was that version, with its genetic mixing of Black R&B and White C&W, that gave birth to American R&R.

The song was based on a couple of previous tunes (a common practice in those pre-litigious days of cultural ferment and experimentation): the song “Cadillac Boogie” and an instrumental called “Rocket 88 Boogie”.  But the version credited to Brenston, as a 1951 composition, would have entered the Public Domain at the end of 2007.

This entry was posted in 1950s, Music. Bookmark the permalink.