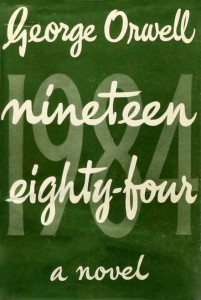 Nineteen Eighty-Four is one of two great dystopian social-science-fiction novels by George Orwell (the other being Animal Farm. Although the title of the book (chosen without a lot of thought, by transposing two digits of the year in which it was written) would seemingly leave it looking hopelessly dated, the strength of the ideas – and perhaps the extent to which Orwell has proven prescient – have kept it current and still very cautionary.

Many elements of the book are already well established in the public domain: doublethink, thoughtcrime, and newspeak have (perhaps ironically) become part of the English language, and Big Brother is character/concept known to people who know nothing of the book itself. The book was published in 1949, and under PD56 would have become public domain after 2005.

But it did not, and in a case of life imitating fiction, copies of the book were quietly erased from the Kindle e-readers of Amazon customers who had purchased an edition that violated the Orwell estate’s copyright… much like the totalitarian government depicted in the book might have done with a book that was no longer politically correct.

This entry was posted in 1940s, Prose. Bookmark the permalink.