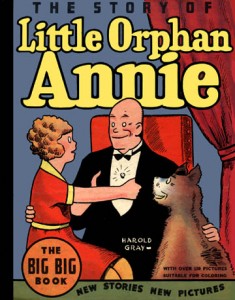 Little Orphan Annie is a classic comic strip, created by Harold Gray. Although commonly thought of today as a left-leaning product of the Great Depression era (especially since the Broadway musical adaptation, which reinterpreted it that way), it began during the boom years following World War 1, and took a stalwartly Hoover-era Republican view of society. Oliver Warbucks was (as his name was meant to indicate) a hard-working benevolent war profiteer, who took in a plucky orphan girl and invited her to call him “Daddy”. Accompanied by her faithful companion Sandy (a dog of indeterminate breed) Annie became an adventurer, often separated from her beloved capitalist foster father, but never for very long.

The strip began in 1924, continuing until its cancellation in 2010. In the 1970s, following Gray’s death it had lapsed production and ran reprinted strips from its glory days, but was revived in 1979 when the musical reignited interest. Under PD56, the copyright would have lapsed at the end of that year; it was narrowly revived itself the year before, when Congress extended copyrights to 75 years.

This entry was posted in 1920s, Comics. Bookmark the permalink.