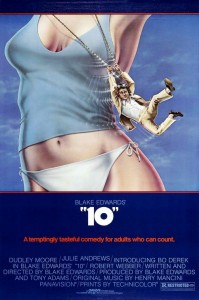 In recognition of today being 10/10/10, an item related to the Blake Edwards movie "10", starring Bo Derek, Dudley Moore, and “Boléro”, a musical composition by Maurice Ravel.

The piece owes its existence to copyright.  The project began as an orchestral arrangement of a fairly recent Spanish composition, but Ravel discovered that source material was still under copyright, and produced a composition of his own, inspired by a music and dance form of the same country: bolero. It is a very minimalist composition, maintaining a steady percussion line throughout, and repeating the same melodic theme as it’s passed from instrument to instrument. That also makes it rather memorable.

First published in 1929, it would have entered the Public Domain in 1987, several years after it re-entered public consciousness thanks to Blake Edwards.

This entry was posted in 1920s, Music. Bookmark the permalink.

One Response to “Boléro”