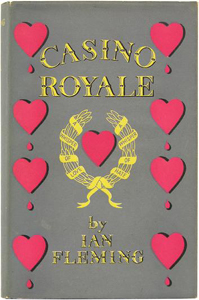 Ian Fleming’s spy novel Casino Royale was published in 1953.  It introduced the characters of stalwart CIA agent Felix Leiter, the villain Le Chiffre, and the beautiful but unpredictable Vesper Lynd…. oh, and some guy named Bond… James Bond. Although there are many elements of the 007 franchise that are not included in this book, and which would remain under copyright until they were also over 56 years old, the character of Bond himself would have entered the public domain at the beginning of 2010.

This is – or at least would’ve been – a very big deal. The later novels and all of the films would still be under their own copyright restrictions, and EON Productions would still have active trademark protection on “007″, “James Bond”, and presumably the titles of all of the novels. But with a little creativity another studio could produce their own films starring the fictional famous spy, or another member of MI6 with a license to kill.

This entry was posted in 1950s, Movies, Prose. Bookmark the permalink.